Stablecoins are cryptocurrencies that maintain a stead value, by being pegged to anothercurrency, commodity or financial instrument. They provide an option for investors of high volatile cryptocurrencies, such as Bitcoin (BTC), who want to partake in common transactions without the worry of outrageous swings in their investment.

Bitcoin, though still the most popular cryptocurrency, is highly volatile in price. For example, its value increased from $5,000 to over $63,000 within a one year time span; however it then decreased almost 50% in worth just two months later. Furthermore, intraday swings are often large; at times the currency will move more than 10% in less than five hours.

This volatility can be ideal for traders, but those performing regular transactions, like buyers and sellers, are left to speculate on the risks. Those investing in cryptocurrencies for long-term appreciation don’t want to become famous for paying 10,000 Bitcoins for two pizzas. Most merchants also don’t want to take a loss if the price of a cryptocurrency plummets afterthey’ve been paid in it.

A currency that’s not legal tender must remain relatively stable to serve as a medium of exchange, meaning those who accept it are assured it will retain purchasing power in the short term. Among traditional fiat currencies, forex trading daily moves of even 1% are rare.

As the name implies, stablecoins aim to keep the value of cryptocurrency from changing rapidly.

While some argue that stablecoins are unnecessary given the ubiquity of the U.S. dollar, many cryptocurrency investors believe digital tender not regulated by central banks is the future. There are three types of stablecoins, which each use a different method to maintain their value.

Fiat-collateralized stablecoins derive their value from being backed by a reserve of fiat currency, such as the U.S. dollar. In theory, other forms of collateral could be used to back these stablecoins (e..g precious metals or commodities), but most currently in circulation are only backed by USD reserves.

Tether (USDT) and TrueUSD (TUSD) are popular stablecoins backed by U.S. dollar reserves that are maintained by independent custodians and regularly audited for parity to the dollar.

In order to issue $1 million in a crypto-backed stablecoin, MakerDAO holds $2 million in reserve. This is done as an insurance policy against a 50% decline Ethereum’s value (which Dai is pegged to), should it happen. For example, though DAI is pegged the USD, 150% of all circulating DAI is backed by ETH and other cryptocurrencies.

Algorithmic stablecoins are those that use an algorithm, or a set computer program, to stabilize the value of the coin by controlling its supply. This is as opposed to holding reserve assets which some stablecoins do and some don’t.

In contrast to central banks, which rely on a reserve asset to maintain the value of their currency exchange, cryptocurrencies are not backed by anything. Rather, the issuing organization establishes monetary policy in public and its status as tender reinforces credibility.

Stablecoins have come under fire by regulators recently, as the market has grown rapidly to be worth $130 billion. In October 2021, IOSCO said that stablecoins should be regulated in the same way as other financial infrastructure, including payment systems and clearinghouses. The proposed rules would focus on those stablecoins which are considered systemically important by regulators- i.e., those with potential to disrupt existing payment and settlement transactions..

Furthermore, politicians have advocated for stricter regulation of stablecoins. For example, in September 2021, Senator Cynthia Lummis (R-Wyoming) called for audits of stablecoin issuers to become routine, while others support replicated bank regulations for the sector. 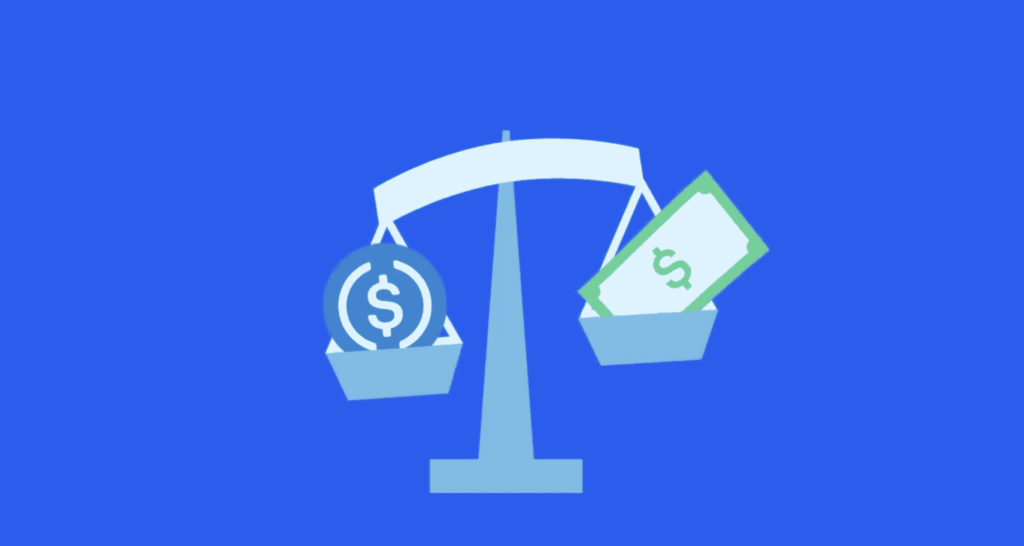 Wondering how stablecoins are taxed in your jurisdiction?

Stablecoins have increased in popularity in recent years and are now a more significant element of the cryptocurrency world. It was predicted that stablecoins would conduct $1.7 trillion worth of transactions during Q2 2021.

Right now, you could be using stablecoins like USDC, Tether, or DAI in your transactions. We’ll go through how to report these transactions on your tax return in this post.

What is a stablecoin, and how does it differ from regular cryptocurrencies?

Many crypto investors are hesitant to utilize virtual currencies like Bitcoin and Ethereum for everyday purchases. Many consider these assets to be long-term investments and don’t want to spend them, incur capital gains, or miss out on future price increases.

Stablecoins were created to address this issue and give cryptocurrency users a currency they could use on a regular basis.

Stablecoins aren’t meant to gain in value over time; instead, they’re intended to track the cost of external commodities or currencies. Stablecoins have been developed that track gold, oil, and the South Korean Won as reference prices. However, the majority of popular stablecoins are linked to the dollar’s value.

How is stablecoin activity taxed?

Despite the fact that stablecoins were created to be utilized in routine purchases, they are handled equally by the IRS as any other cryptocurrency.

Buying a decent or service with a stablecoin/trading a stablecoin for another cryptocurrency is considered taxable.

You will have to pay capital gains taxes based on the price fluctuations of your stablecoins. Because most popular stablecoins are intended to track the value of the US dollar, it’s probable that your capital gain will be near zer o. However, you should record all of these transactions on your tax return.

The disposal of a cryptocurrency for a stablecoin is called a trading event. Depending on the price movement of your assets since you received them, you will have capital gains or losses.

Receiving stablecoin as a payment

If you accept stablecoin as payment for your products and services, you must declare it as ordinary income. Depending on where you fall in the tax bracket for the year, your tax rate on these earnings will vary.

What if I’m transferring stablecoin between wallets?

You should not report on your tax return the transfer of stablecoins between wallets, which is a non-taxable event.

How is stablecoin interest taxed?

Users of popular cryptocurrencies such as BlockFi and Celsius can make money by investing in a stablecoin. Your bonuses in this case will be classified as regular income and taxed accordingly.